We have had some nice weather recently, so when I'm not wearing my work uniform (this one is royal blue - not quite so bad as the yellow), I've been trying to wear floaty things and light layers.

This is a bit a of a different look for me - because it feels a bit Edwardian or even 1920's style. I even thought the bloomers with a baggy dress belted at the waist looked a bit like early 20th century bathing costumes. This is a dress I got in a sale and dyed black a while ago - I'm sure I've shown it before. This time, I wanted to draw out the stitching colour by wearing it with cream. I picked the tights and built everything else from there. 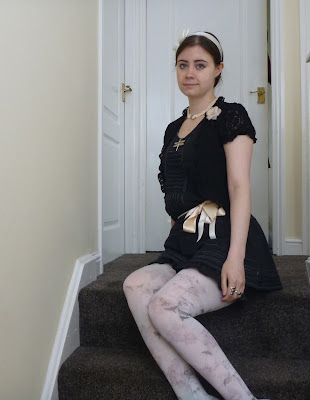 Outfit rundown:
Dress: H&M dyed by me
Bloomers: bodyline
Tights: brought from a friend
Lace bolero: Forever 21
Dragonfly brooch: from Whitby present from mum
Belt: it's two bits of ribbon - one cream and one peachy pink, from my stash
Pearls: from my friend Miriam, she got them in China =]
Bracelets: New Look and Primark
Flowers: H&M
Hairband: Discount store on the local high street £1.99

My hair was being uncooperative as unusual, so my bun was messier than I would have liked but otherwise I'm quite happy with this one =]
Posted by The Cemetery Dreamer at 08:51 2 comments:

Once again I have been away for a very long time, I never meant to be gone for so long. I've been working so much, doing so many other projects, that I've really missed out on what's been going on in the blogosphere!

I haven't had much time to look after myself either. I fell back into my habit of just grabbing some clean clothes of the pile and being as comfy as possible. I got the internship I mentioned last year and it was completely amazing, but as it was a museum store I spent a lot of time wearing steel toe cap boots, jeans and warm jumpers! I had to blog about my experiences a little - you can read about it, here, here and here. That last link includes a photo of me looking especially glamourous!!!

I tried to round up outfit photos taken since my last blog at Halloween but I hardly found any. Even when I've managed to dress up nicely I haven't taken many photos! I think this is partly because I'm unhappy with the way I look at the moment - it's probably not very noticeable to anyone else but I'm out of shape - I've been eating junk and sleeping badly and it shows. I'm a little heavier than I'd like around the tummy and my skin is dreadful.

Here's the pictures I did find: 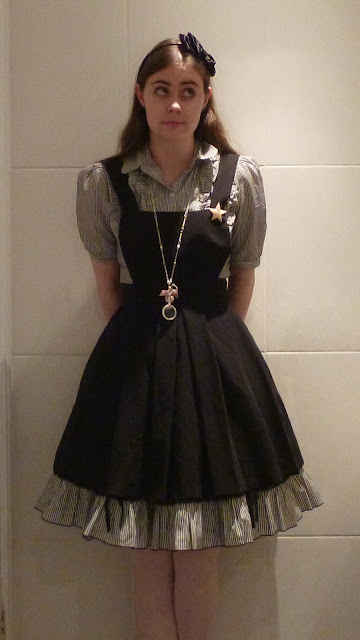 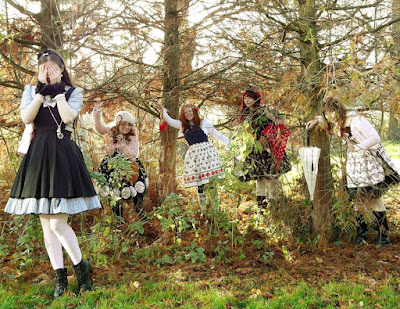 This was a trial run I did of an outfit for the Tea Party Club Calendar - 12 of the lolita comms in the UK each submitted a group photo for one month. The Midlands girls were given June so we wanted something of a picnic theme! A little hard to arrange with a winter photoshoot. We all tried to wear something food themed! In my case this was HARD. So this was my first attempt at Sweet Lolita. In the finished version have a cupcake on my necklace, an ice cream brooch and a teacup on the pink bag I made to match the outfit! I also made some pink bows too to better match my tights =] Because of the short notice, not many members of the comm could make it to the photoshoot, but it was a lot of fun anyway!


The next outfit photo I found was one I had obviously planned to post. This was taken in January this year - It was the outfit I wore for a Saturday dong research in the library. 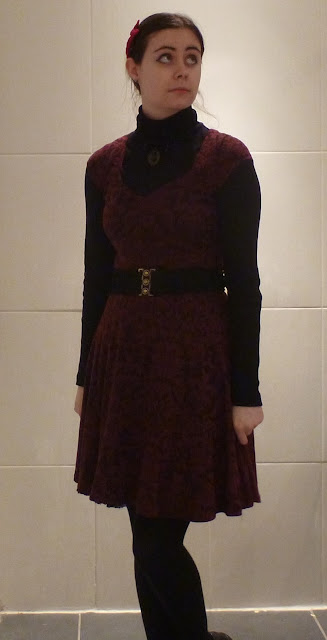 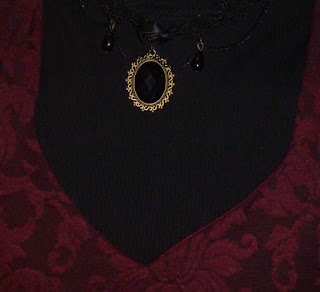 Outfit rundownDress: Primark, it was one of their pricier items - cost me a whole £10!
Turtleneck: New Look £9.99
Tights: probably primark or H&M
Belt: Primark - you've all seen in before.
Necklace: Present from Flick and Ed for my Birthday last year
Hair flowers: H&M

Then there is a gap - despite attending a couple of lolita meets and wearing some nice outfits for conferences, interviews and meeting friends, I didn't photograph any of them =[

I gave a talk on Death in Art for an exhibition in the Coffin Works Museum on the 6th June. Which also happened to be International Lolita day! This is what I wore: 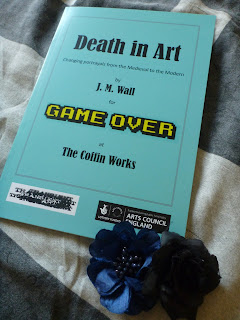 Outfit rundown:
Blouse: Ebay - it was really cheap - I think about £4, but it did arrive very dusty so I wouldn't recommend the seller (it washed out OK though)
JSK: Funeral Procession of the Rose by Alice and the Pirates. I brought it new (my only new brand piece)
Tights: They were a Christmas present from my mum
Boots: New Look
Hair band: Ebay
Flowers: H&M and Claires
Necklace: New Look £8

I'm hoping to dress up nicely more now I've changed my job slightly - I'm working 5 days a week instead of 6 in the holidays and only weekends in term time. Best part is, it's a permanent contract!! I am so happy to have more job security - I love working at museums, but seasonal contracts suck!

I had better start making myself some dinner - trying to eat more healthily too, maybe I'll be happy with my skin again soon!

Posted by The Cemetery Dreamer at 08:28 7 comments: