Uncovering the past at Highgate

Last week I volunteered at Highgate Cemetery. I was all prepared to spend the day clearing brambles or laying turf just for the priveledge of spending some time in my favourite place in London. As it turned out I was even luckier than that; I got to do a little digging...

Highgate cemetery opened in 1839 and is probably the most famous of the 'Magnificent 7' Victorian cemeteries around London. In its heyday, Highgate was the place to be buried for the rich and famous; residents include George Elliot, the Rosetti family, Michael Faraday, The Dickens family (except Charles himself who is in Westminster Abbey) and many more. The cemetery was closed in the 1970's when the company who ran it went bankrupt. It was taken over by a voluntary organisation; the Friends of Highgate Cemetery who are slowly working to restore the cemetery to it's former glory, whilst being sensitive to it's value as a nature reserve.

There is an original map of the cemetery showing the name and location of every grave. However due to extreme age, parts of the map have crumbled. The Friends of Highgate are working to re-map these areas. I got to spend the day clearing the ivy and the soil from the tombs which had been buried by years of leaf fall since its closure. 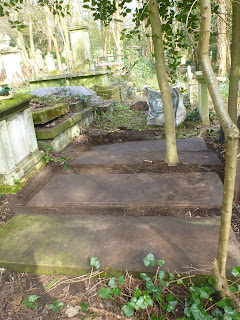 It was one of the most fascinating and rewarding days I've had in a long time. Revealing the names on the stones and learning a bit about their stories. The first name I wiped soil from was Mr James Faquhar Skeffington (what a brilliant name!) he was only 12 when he died.

I'm hoping to return to the cemetery a lot this year; because it is the focus of my Master's thesis. Hopefully I'll take many more photos, but I thought you all might like to see a few pictures of this wonderful, atmospheric cemetery. A true hidden gem of London. 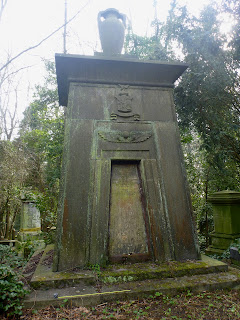 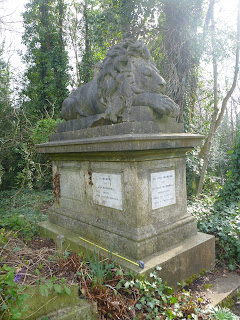 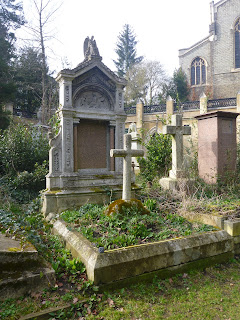 For more images check out the offical picture gallery
Posted by The Cemetery Dreamer at 15:54