So this is my 2nd contribution to Red and Black week! I really loved looking through everyone's posts yesterday, although I didn't have much time so I'm sorry for not leaving you all lots of comments! I had a meeting to get to, in which I discovered that my department at Uni is being closed. They are splitting all the subjects up into different departments. I'm not sure what'll happen to me yet- I might have to move to another campus, over 40 miles away!

I've decided that I'm not going to worry about it right now though, because it's out of my control. So I'll distract myself with blogging =]

I was in a youth theatre for 5 years, performing in 3 shows a year. We did everything from Shakespeare to modern comedies, each show had a cast of at least 40 (sometimes 100) young people aged 9-21. I had the best time, made so many friends and gained confidence to be myself. I owe the person I am today to the care, love and support of the people I met there, especially my director who is an amazing woman. She used to say "The people who say something is impossible should shut up and get out of the way of the people that are actually doing it" and I still try to live by that philosophy.

These pictures are from a production we did of Two by Jim Cartwright. This play is set in an English pub and explores the lives of the pub's regulars and those of the Landlord and Landlady. It was originally written so that all of the characters would be played by just 2 people, but we performed it with a large cast. The stories of the locals are at times funny and at times tragic, including an unsuccessful womaniser, a sweet couple with learning difficulties, a woman waiting for her married lover and many more. Our set and costumes were entirely Red, White and Black and we even got 1000 free cans of Coca Cola for the production!

I played Lesley, a woman with a controlling abusive husband, trying and failing to escape from her marriage. 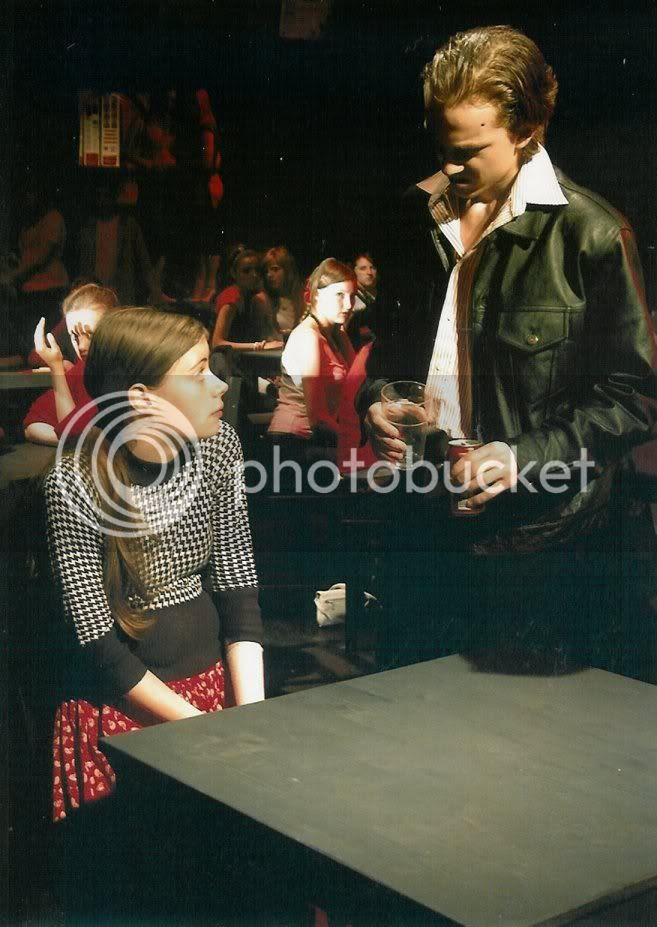 Despite being a youth theatre, we never tried to shy aware from difficult topics. In fact the director decided to make this part all the more tragic by portraying Lesley as pregnant (I had fun walking around in that costume, because everyone assumed it was real and gave my male friends evil looks for knocking up a teenager =P). 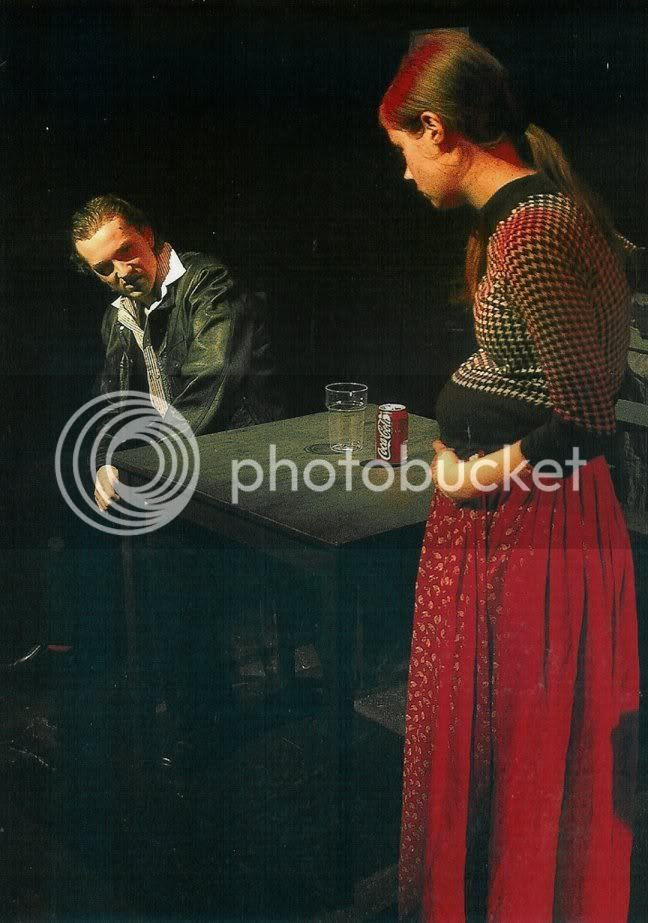 This role was the most challenging thing I ever did, because I found it so hard to leave the part on stage. For the 3 months of rehearsals, part of me was Lesley, and that was hard. I think it made the performance all the more compelling though. The guy playing the husband Roy is really a nice guy, but he's an incredible actor (now at LAMDA) and although he found the part as tough as I did, it worked. In the first rehearsal he refused to hit me; stage combat just wouldn't have looked real for most of the audience, so when he beat me, it was real. I had to slap him the first week, so he didn't feel so bad about it! Totally worth it though; we had the audience in tears every night.

The best part of the show for me though was an unintentionally funny moment. On the last night my grandparents were sat in the front row of the theatre. I didn't know they were there until the end of the scene when I got slapped. My Nana (who was 85 at the time) jumped straight up, waved both her walking sticks in the air and shouted 'Ooh, the bastard, I'll kill him!' fortunately my Granddad restrained her and the audience mostly didn't notice because of the loud music and action on stage (the landlord had pinned Roy to a wall and a fight was breaking out). I love you so much Nana!

I hope you've enjoyed this slightly unusual post. If not, never fear, tomorrow will be back to normal; I'll be uploading pictures of all my Red and Black outfits from this week =]
Posted by The Cemetery Dreamer at 02:47