I'm not sure how I forgot to post this; drafted it on the 1st November...

After my visit to Highgate Cemetery to do research and take pretty pictures I went to the theatre for a very special event (don't worry I did at least attempt to scrape the grave-dirt off my shoes first).

I went to Grimm Tales: Telling Stories to see Phillip Pullman and Neil Gaiman talk about fairytales. When I found out there would be a signing after the event I very nearly fainted! I have been a fan of Phillip Pullman since I was a kid; His Dark Materials is one of my favourite trilogies of all time and the character of Lyra was my role model, inspiration and best friend when I was 11 and had no real-life friends to help me be brave. I couldn't wait to meet him and say thank you; thank you for Lyra, thank you for writing big, important stories for children, thank you for everything. I was equally excited to meet Neil Gaiman; who I'm sure you all know I also love, although didn't discover until more recently.

I was horribly dismayed upon arriving at the theatre to find that Phillip Pullman had been taken ill and couldn't make it to the event. Instead Neil Gaiman would be speaking to Meg Rosoff; the author of How I Live Now (which I haven't read, but I should do).

The first thing to make me smile again after that dreadful news was this sign: 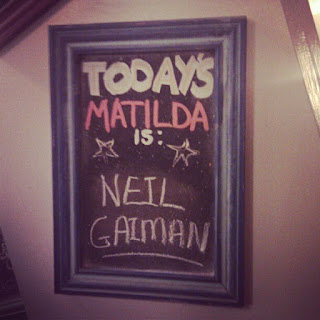 (The Cambridge Theatre where the event was held is where the Musical of Matilda is playing at the moment; the stage set for it looks so wonderful).

Despite the lack of Mr Pullman, the event was delightful, with Audrey Niffenegger reading one of the stories from Pullman's new adaptation of Grimm's tales and Neil and Meg talking about stories, the importance of fairy tales, why heroes in fairy tales aren't heroic and many other things (including James Bond!). It ended with Neil reading us his All Hallow's Read story; Click Clack the Rattle-Bag. It was a genuinely chilling tale!

Then we queued up for the signing; me slightly nervously clutching my copy of Coraline, purchased at the event for signing, (I was a bit disappointed there were no copies of the Graveyard book, which would have given me an excuse to say 'I am doing research at Highgate, thank you for putting the Egyptian walk into your book'). I was a little worried that I'd go all silly fan-girl and not be able to talk when I finally stood in front of Neil Gaiman. 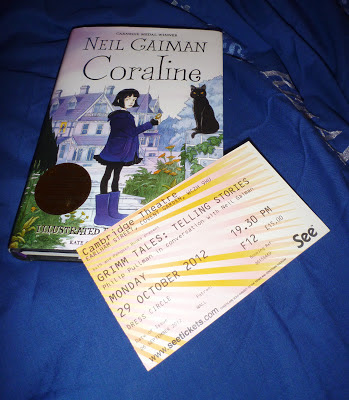 In front of us in the queue were a couple with their little daughter, who must have been about 8 and could have easily played Matilda herself. It made me smile to see her earnestly reading her copy of Coraline, which her dad proclaimed she 'would prefer to the film, it's a bit less scary'.

When we got into the room where the signing was, when there were still about 15 people between us and the signing table Neil announced that he was going to have to stop writing personalisations and just do signatures because there were 140 more people to see in 20 minutes. I was disappointed but very glad he was doing something to ensure everyone who wanted one got a signed book.

When the little girl and her family walked forward he looked up and exclaimed 'You're the girl from the video! It's so good to meet you! I wish you'd been down earlier so we could talk more' and shook her hand, asked her name and even personalised her book (I was so happy he broke his rules for her). She gave him the script from the video and then it was my turn to get Coraline signed.

He said 'sorry about that, she's the girl from the 'because the origami' video'. Then it was my turn to exclaim because I'd seen the video and was amazed I hadn't recognised her; I told him so. Then he signed by book and I quite embarassedly said 'I've got something for you too' (other than the script, the table was bare, clearly bringing presents was not usual practice) 'It's academic proof of the cat's dream'. I handed it over and he started to open the paper to look, looked up at the line sheepishly and said 'I'll look at it later. By the way I like your hat'. I said thank you and left, floating at least 2 inches above the floor. 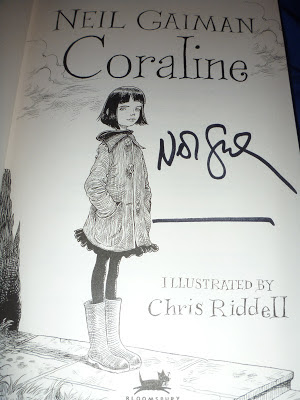 The wonderful video is here.

For those who don't know, this is the cat's dream. When reading for an archaeology essay I found 2 lines of text in Terry O'Connor's book 'The Archaeology of Animal Bones' that said roughly; Homo Sapiens, domesticated in 7000BP by cats as a source of food. I had photocopied the page for Neil and written the Havard reference for the book at the bottom.

I hope he did read it. I hope it made him as happy as it made me when I found it.

I didn't take an outfit photo, but in addition to my very special antique top hat I was wearing an outfit very similar to this: 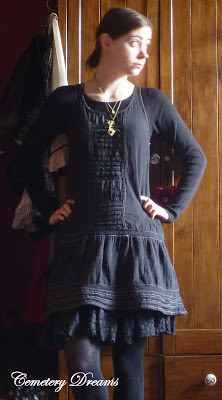 Instead of the necklaces in that photo I wore my Ankh, as a tiny nod to Death from Sandman.

I will leave you with this piece of wisdom from the first page of this edition of Coraline: 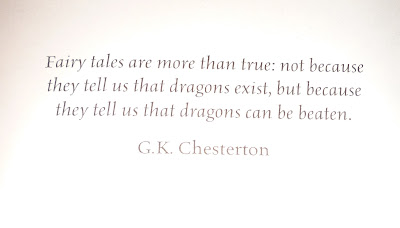 Posted by The Cemetery Dreamer at 09:23