I got these trousers at a charity shop a month or so ago, they are from Old Navy and still had all of the tags on =], quite a bargain too at £4.

I liked them how they were but wanted to add something. because I have several pairs of black jeans already. 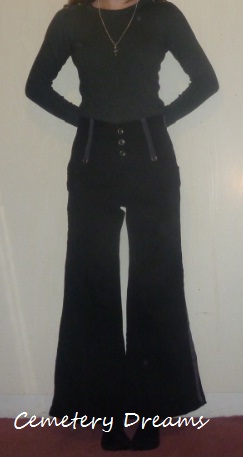 To add the stripes I used some grey ribbon I got for 29p because it was a remnant. I didn't realise quite how bad the sun fading was until I'd finished (which serves me right for not sewing in good light). I quite like the effect though so I hope that when I wash them a few times the colour will even out.

The original buttons were plain black so I swapped them for these pretty silver ones. They were expensive though £7.20 for 8. Which means they cost almost twice as much as the trousers but I like them so never mind =P Next time though I won't buy buttons in John Lewis when the Rag Market is closed! 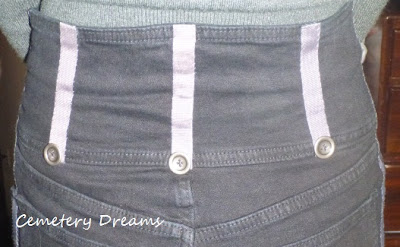 Not the best picture but at least I cropped out most of my bum =P (I cropped my head out of all the pictures  too because I'm having a bad skin week, I think that I may be allergic to the new face wash I brought too...)

Hopefully this is the last hand-sewn project for a while because I finally took my sewing machine in to be serviced! I've asked them if they can keep it until I get paid again though because it turns out I need a new needle arm and that's an extra £25 on top of the £48 service. I think maybe putting the needle through my finger screwed it up =P
Posted by The Cemetery Dreamer at 13:22